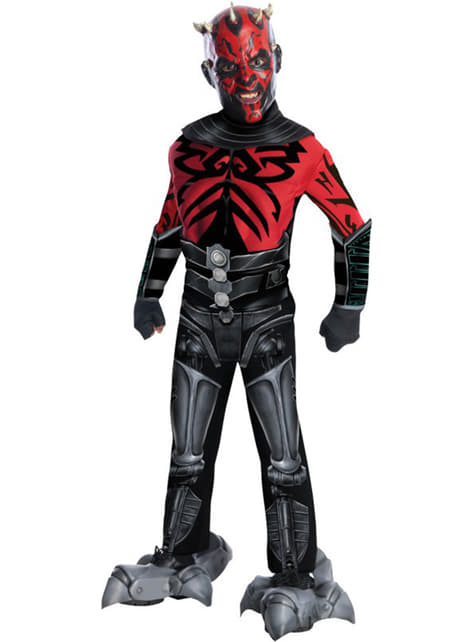 Obi-Wan thought he’d killed you. What he doesn’t know is that you have returned much more powerful. Show him and exact revenge with this Darth Maul mechanical legs costume for a boy.

Darth Maul is a fictional character in the Star Wars saga. He is one of the main antagonists of the fourth instalment of the saga, Star Wars Episode I: The Phantom Menace. Maul serves as the apprentice of Darth Sidious (Chancellor Palpatine). Wielding a double-bladed lightsaber and trained as a master of lightsaber combat, Maul serves as a personal assassin for Darth Sidious and is sent to eliminate Obi-Wan Kenobi and Qui-Gon Jinn. In this fight, after killing Qui-Gon, he was split in two by the sword of Obi-Wan, though he did not die. In "The Clone Wars" series Darth Maul used his knowledge of the dark side of the Force to get new legs (initially it was six legs), but then fixed them, giving the appearance that this costume presents, with two mechanical and functional legs.

This awesome Darth Maul costume includes a jumpsuit with muscled chest in red and black (the character's skin), as well as mechanical silvery legs, a pair of grey gloves, a black necklace, spectacular silver boot covers and a red and black mask with horns. 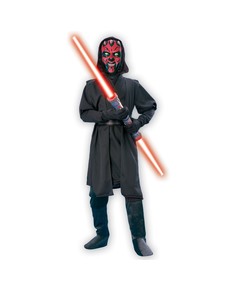 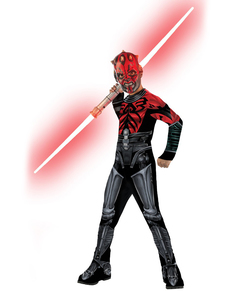 Upload your photos to Instagram with the hashtag #funidelia followed by #funidelia12233.