You’ll inherit your father's knowledge and become the best bounty hunter with this Star Wars Boba Fett costume for a boy.

Boba Fett was a Mandalorian warrior and bounty hunter. He was a clone of the famed Jango Fett, created as the first of many Fett replicas designed to become part of the Grand Army of the Republic, and was raised by Jango as if he were his child. Jango taught Boba a lot, and trained him to become a skilled bounty hunter as was his father figure before him. In 22 BBY, Jango was killed at the Battle of Geonosis, which started the Clone Wars. As a child, Boba was forced to grow up and travel the galaxy. Later, he became a bounty hunter and worked for the likes of Jabba the Hutt, and became very famous despite his young age. Star Wars is an American media franchise belonging to the genre of science fiction, and was conceived under the screenwriter, director and film producer George Lucas. The plot is situated in a very distant galaxy, where there has been a confrontation between the Jedi and Sith for centuries.

This costume includes a silver-green and yellow jumpsuit with accents in brown like the belt, a brown coat and a spectacular green and brown mask. 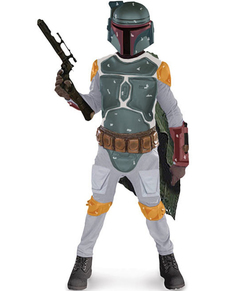 Upload your photos to Instagram with the hashtag #funidelia followed by #funidelia12243.